For my personal research project i decided to focus on something which was genuinly important to me and that is ofcourse the world of Bee's!

Not everyone knows this about me but i actually try and do my bit to support the world around me and this includes looking after our Bees. I aspire to be a bee keeper in the future but as im currently serverly allergic to bee stings ive decided to wait a while.. you know like when the words truely gone tits up and im ready to die.. for now though, im enjoying the latest season of Greys Anatomy far too much to make any kind of commitment to a possible death scenario.

So back to the point my personal research project is based around Bees.. Not sure as to exactly what i shall be doing but il keep you updated!
Posted by chloe :) at 13:05 1 comment:

If anyone happens to be taking a look at my blog today/tonight i would just like to inform you that i am rearranging everything... My blogging troubles are seriously getting on my nerves what with the deleting posts.. rearangement of images etc... i decided to take everything off and put it all back on again at home on mr smithy  my trusty computer.. hopefully this will sort it out .. hopefully..
Posted by chloe :) at 16:13 No comments:

So..I'm a little bit annoyed at this current moment in time regarding my personal research project reason being my research has gone missing..

Due to this i will be doing the research all over again and this time just putting it onto my blog.. I do apologise for how unorganised my already messy blog is going to become with updates refering to both projects but hey.. what else is to be done?
Posted by chloe :) at 13:13 No comments:

This is a cardboard cut out created to help make the shape for the base of the piece. It was intended to make it alot easier to get the shape desired but it wasnt.. it seems like im one of those few talented people who cant draw a straight line with a ruler.. no exageration. Anyone once the cut out was perfect (ok almost i had to recreate a head) i tacked it down onto the wood and draw around it .. easy as pie..

Firstly forgive me for the image above.. no matter what i do everytime i click publish post its rearange itself .. nice to know the blogger problems im having are at least consistant..
Anyway.. the above picture shows it in the making! Its getting exciting now that everything is coming togther. Its just time now to start putting the slabs on  :)
Posted by chloe :) at 05:23 No comments:

So i wanted to be a little bit clearer of my intentions for my piece. i am making a coffin/sarcophagus for myself and it will b life size.. thats right ive measured myself up and its ready to go... BUT if i hear one more person say "ooo thats tempting fate" i will scream.. ok maybe not scream.. but il defiantly tell them to shhh .. we're all going to die one day and if i just happen to die during the making of this piece then then its probably because i drilled through my own face and not because fate was cursing me for making a coffin.

So now thats been said.. Yes im making a sarcophagus and Yes im strangely intrigued by the whole thing.. maybe that says more about me then the work itself.. Ive been trying to find a reason to why im doing this piece and its been hard! I guess thats because there isnt just One reason theres a few...

Firstly, i would be a liar if i said i havnt had my share of deaths.. believe me people are dying like its the new in thing to do. Pehaps that does influence me.. i guess it makes me a little bit more open with the idea of death and willing to explore it,  but i wouldnt say thats the only reason. Im also really interested in the idea of transition.. going from one state to another whether thats physically or metraphysically. I also know from my own experience how much an event can influence the decisions you make and ultimately what you become. I didnt want to create a piece which was based around the whole idea of what if.. theres way too many. I needed a personal piece to push my own boundaries (trust me.. saying the word "personal" to me is like saying frost bite to an eskimo..) and one which would tell a story. I believe my piece will do this. Im hoping to create a life size sarcophagus for me and i want the inside to be decorated with a map of my life.. all the defining moments whether its as clear as being born, passing my GCSE's or living in a certain area or as messy as a best friend dying.. it all needs to be explored as it all played an important role in my 21 years of life.  So bare with me.. This isn't going to be an easy piece for me at all.. im still struggling with how honest to make it and im finding myself frequently saying "i like to read"  So if your willing to go through the awkwardness with me i think it could work out to be pretty cool :P

So with the excitement of making the piece i forgot to update my blog i am sorry.

Below this post are some drawings i did in my sketch book to be used in the final piece but i realise i never actually explained where i got my inspiration from for the drawings so here it goes...

Grayson perry has been a huge inspiration to my work recently. I love his style of doing things and i love how couragious he is to make pieces soo personal to him - something which ive always struggled with. 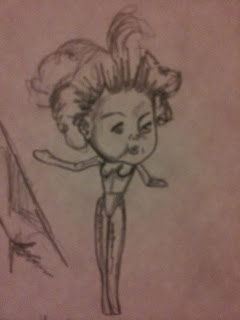 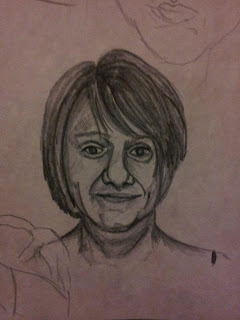 Here are some drawings from my sketchbook. Currently im choosing to draw anything and everything wich comes to mind and coincidedly holds importance for me. The drawing of the weird big dolls head on a barbies frame may seem like something which is just weird but it isnt. It's actually a memory from events that happened in a period of my life which was very important to me. The "kill doll" (as i like to call her) reminds me of this every time i see an image of her. The other image is of my Auntie Cathrine-or susan..whichever you happen to know her by. 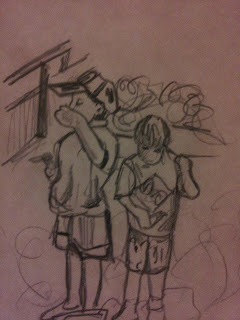