Robert Bradford.
"i see myself bit like a mad scientist trying to create life/bring things to life." 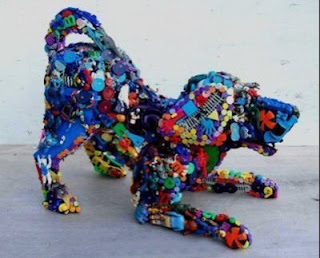 Robert Bradford was born in London and currently resides in Cornwall where he has been for the last 7 years. He is widely known as being Sculptor however he originally studied Painting at Ravensbourne College Of Art and later studied Film making at The Royal College Of Art. Robert Bradford currently mainly focuses on creating pieces of art with the mass use of recycled toys to create a much bigger piece as the image below shows:
Robert Bradford wanted to be an Artist ever since he was a little boy but after finishing college he found it hard to depend on sales of his art work to get him through the financial commitments life brings, due to this he started work as a mental health worker for several years which allowed him to carry on with his then chosen medium of paint with the occasional video or photography piece. Throughout this he frequently exhibited his work in Great Britain the locations of exhibition included the I.C.A, Richard Demarco Galleries in Edinburgh and the Arnolfini at Bristol. Once Bradfords work had gained commercial success he started lecturing at various college and universities including the Maidstone College Of Art where he was offered a lectureship at San Diego State University in California U.S.A. He chose to stay and work there for five years and gained exhibitions at the San Diego Museum of Art, Bernard Jacobson Gallery and Stella Polaris Gallery.
He also soldpieces to private and public collectors. 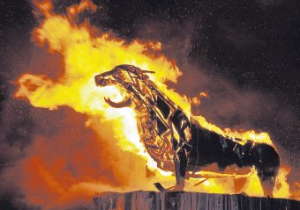 Once back in England Bradford persued his interest in Mental Health once again and trained and practiced as a psychotherapist in a part time job in London and Bristol. He chose to work part time as he wanted to focus the rest of his time on building up his sculpture portfolio where he chose to do pieces for public art. This is when he started his fire sculptors which include Over 40 pieces some were left as pieces others were set alight to create a moving piece of work.
Robert Bradford moved to Cornwall in 2001 and carried on creating these interative pieces where he become increasingly known for his annual Beast Burnings on Bodmin Moor.
The idea for Bradfords fire work steam from his work as a psychotherapist where he found his love for theraputic pieces and experimentation with matter.
In 2004 Robert started to experiment with mediums used to create his sculptors  where he found his love of plastic toys  and adapted them for use as his main material. 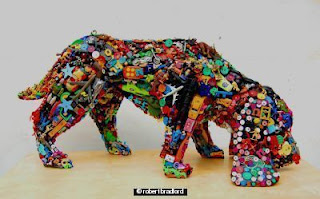 These pieces are what he is most known for internationally and also what I find most appealing about this artists work., They are his Plastic Series. The inspiration for these pieces came from his wanting of something a bit more exciting and meaningfull- something with a history.  The plastic pieces originally came from Bradfords  own toys that were put away in storage when he was a little boy. He started to experiment with ways of putting them together to create a bigger construction  for a large sculpture. After trial and error he found that simply placing a screw to hold the pieces together was the best method (this wasn’t tried originally as it was believed pieces would crack) ,the base is made from wood. The toys are used as the building blocks for the creation but they also work on another level, Bradford likes the idea that the toys individually are creations from unknown designers and that by putting them together he creates a bigger pieces which enhances the toys individually as well as using them solely as material. The toys also show times and movements in history where certain toys were fashionable like Barbie dolls, toy guns and Lego bricks.
Even though Bradfords pieces include old toys and ultimately is economical this isnt something which Bradford has designed his work around its coincidence that the material of his choice is creating sustainable pieces. Bradford protects his pieces by the copy right law which stops anyone from claiming his pieces as their own, however, this doesnt cover Bradford if copies are made from his work including the style of which its done and the  method its achieved which many other artists do protect themselves against. 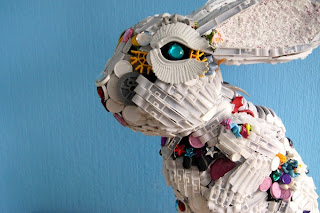 Here is what Robert Bradford said during an interview :
"It is my intention to make an art that is communicative but I have no
message to send. There are some paradoxes. I am too lazy and too driven to
give very much time to recycling, but I also dislike waste"
Robert Bradford inspires me in more then one way firstly, i respect his work ethic the fact that he trained to be a pychotherapist aswell as continuing to persue his love of art shows his dedication and down to earth nature. Secondly, Bradfords style of work isnt usually something which i like but i do like the way its created.  Its appeal of course is the eye catching quailities it has: Its difficult not to be impressed by his work. The simple yet imagitve idea of taking an object and turning it into another object- even a piece of art work is what has appealed to me here, the toys get lost within the piece and provide a colourfull outcome. It also creates a moment where you can stand back and say " i had one of those" and that can unite people as most of us have played with toys at one part of our lifetime and the sculptors themselves are made from parts of peoples history. Thirdly, i like how he changes his materials to suit whichever series of work he is creating this is something which i need to apply to my work as i mainly only work with paint. I have seen through bradfords work that you can stick to what you like, but what you like changes if you give yourself the chance to evolve therefore creating and developing bigger and better pieces each time. This is something i shall be thinking about for the future.
Posted by chloe :) at 20:26